Are We There Yet?

Are We There Yet?
Behold, now is the accepted time; behold, now is the day of salvation. 2 CORINTHIANS 6:2
On December 28, 1908, a devastating earthquake struck Messina, Italy, killing eighty-four thousand people. Just hours before the earthquake, local authorities passed a number of ordinances reflecting their ungodly character. In fact, the Christmas Day issue of the local paper had contained a parody actually daring God to make Himself known by sending an earthquake! And He obliged. It is not wise to refuse the grace of God. Jesus gave such an opinion in a parable about some evil tenants (Matthew 21:33–41). They refused to give their landowner his rightful share of their harvest, even after he made numerous requests. They killed the landowner’s messengers, even his own son, in their arrogant rejection of the landowner. So the landowner rejected them and gave the vineyard to others. Many people have the mistaken notion that God is infinitely patient, that the rejection of His offers of salvation do not offend Him. But parables such as this warn us not to reject the grace of God when it is being offered. If you have heard the offer of God’s salvation but have not responded, receive it while it is still being made. Of all the days suitable for salvation, none is better than today.  - Dr. David Jeremiah Morning and Evening
That last line in this devotional is the real plea of my heart to all who come here daily to read this blog.  Many TV preachers and a few local ones have been asking us all the question:  Are we in the last days? Literally: Are we there yet?
Mankind's propensity towards it's own selfishness and sin blinds it to the truth of God's Word.
If anyone would but look around, as Jesus said of those He was speaking to, you can tell the weather, why aren't you as discerning about His being there?
God's Word cannot be broken, twarted, stopped or any such thing.
You, my Dear Reader, are actually all that stands in the way of Christ's return.
Yes, you.
When the last person who is to be saved is saved in Christ Jesus prior to the Rapture of the Church, then the time will be up. The wait will be over, those of us groaning for His return shall be satisfied. As it fully describes in Thessalonians, the dead in Christ will rise first, then those of us who are alive and remain shall join them in the air. Then forever shall we be with Jesus.
This blog isn't just about encouraging or admonishing people. It's God's blog. It's about Him using me to write to whomever He's stirred up interest in to come to Jesus. To grab ahold of the hand of the One reaching into the waters of life to save you. 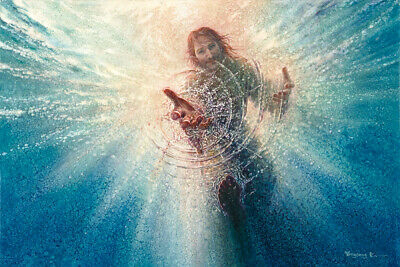 Jesus left Heaven at His Father's bidding to come to Earth, live a sinless life, to go through all the horrific things Satan's minions and himself could throw at Him on that cross...to die, and three days later arise from the dead.
Conquering sin, death and the grave...to save you. To save me.
There's no guarantee of riches, health or anything else after coming to Christ. There's the promise of eternal life in Christ. There's a promise to you that you'll never be alone.
There's the promise that no matter what happens in life, your eternity is secure in Jesus Christ.
Are we there yet?  All the signs of the times are there, yes. There had been some things that Biblical prophecy had been waiting on concerning Israel and the Church, separately, but those have happened or are in the midst of happening. The Church isn't a substitute for Israel.
The Church of God is God reaching out to the rest of mankind. Keeping His promise to Abraham that in him all the nations of the world would be blessed.
You are invited to come to Christ. It's your decision. But please know that it's the most important decision you will ever make.  It decides your eternity.
Jesus loves you and wants to save you, but you must ask.
Before you go about your day, consider what He's been saying to your heart.
You, like millions of people today, might not have another day.
Posted by MacGyverDB at 4:38 AM