Because...
by David Brenneman
Philippians 4 NASB 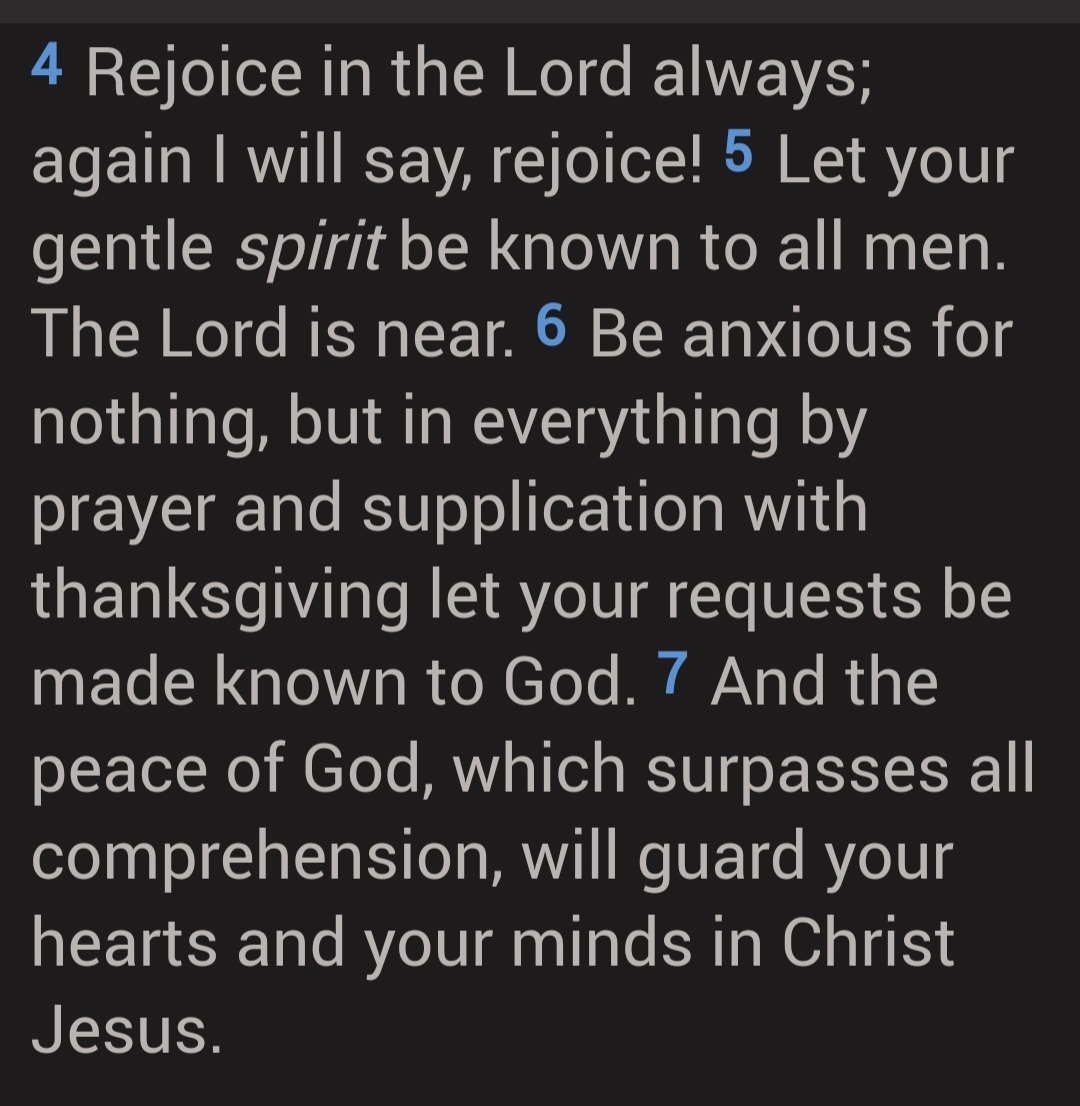 A lot of people know and have memorized Chapter 4 verse 6, and verse 4, but don't miss verse 5!  "The Lord is near."
We can easily be convinced of loneliness.  Far quicker than most things in life.  We see the absence of activity with others as loneliness.  We see that moment of not being around others as being alone.  In Christ we are never alone.
Things may indeed be bad by our perception, but if they are or maybe are not, the truth is: the Lord is near.
In whatever circumstances we are told to rejoice. Quite a bit harder to put into practice than other things. In verse 4 we see this as Paul's CHOICE. He CHOOSES to rejoice, regardless of what his eyes see or his body experiences. Why?  Because...the Lord is near.
Isolation is a very potent weapon by military organizations.  Sensory deprivation can do things to people.  In Christ we are never alone.  In Christ we can face the world.  I have never experienced sensory deprivation on any grand scale but I have intentionally isolated myself to attempt to resolve a headache.
Satan loves to warp the minds of both those who believe and those who haven't yet.  In the Biblical reality of this life those are the only two kinds of people among the living.  He loves to convince people, in every negative way, of their self worth.  He will try to change how you view you. He will try to remove your thoughts of rejoicing.  He will do to you what he did to the Disciples in the boat during a storm. To focus on the storm and take your eyes off who is with you and in you, if indeed you are saved in Christ Jesus.
Peter's big problem while standing on the water with Jesus was forgetting so quickly that he was WITH Jesus.  The Lord was near. 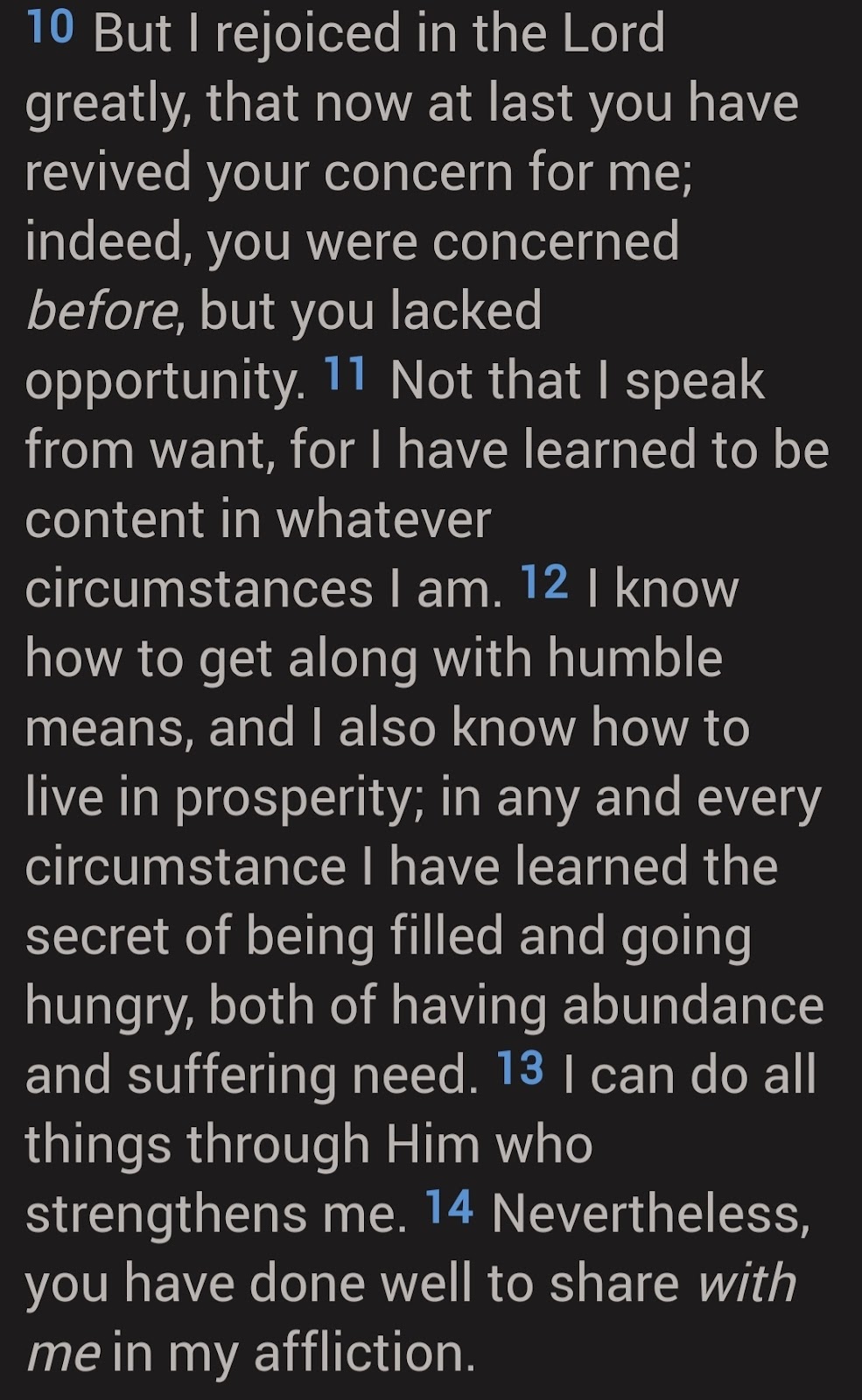 We rush so quickly to try to have what we enjoyed during our younger years that our parents or guardians worked to get.  We fall prey to the schemes of the Devil in pursuing riches, pursuing safety, pursuing building our own 'castles'.  We do not seek contentment, but that next level of joy as we see it to be.
Because of this...we often are burdened with many griefs.  We miss out on Godly contentment because we're looking for worldly contentment.  My Dear Reader these are not the same.
We read in verse 14 that we are to be commended for following in Paul's footsteps.
When we moved we gave up a lot. The number of trips to donate, I couldn't even tell you how many.  Here in this home we now have. Peace and contentment are within reach without the burden of things.  What we do choose to have here has a purpose. We are wanting to use what God's given us to further His Kingdom.
Because...this seems to be the "read between the lines" idea of when Paul likewise uses a "therefore".   He writes out Christ like attributes for us to mimic.
Is your personal happiness of more importance to you than the happiness of those God puts in your life?
We were reminded of the Good Samaritan the other day. That Good Samaritan story has a lot in common with an Old Testament writer, Jonah.  Jonah wanted, honestly, nothing to do with what was his obvious path set by the Lord.  He was being one of those Priests, one of those Jewish Leaders who would rather avoid the wounded.  We who are in Christ are to be ready to go when it comes to the activity that the Lord, who is near, wants us to be involved in.
The Lord is near.  Even with my inability to memorize Scriptures well, that is one I am sure to know by heart.
Read that portion with the next verse, while omitting that period and add a version of a because.   "The Lord is near and so be anxious for nothing, but in everything by prayer and supplication with thanksgiving let your requests be made known to God." The hidden BECAUSE: "the peace of God, which surpasses all comprehension, will guard your hearts and minds in Christ Jesus."
Because the Lord is near.
When we aren't thinking about it. The Lord is near.
When our minds go for things that aren't Spiritually healthy...the Lord is near.
When we think the world is falling apart...the Lord is near.
When we can't make sense of it all...the Lord is near.
When we think we are alone...the Lord is near.
When we choose to give to the world what belongs to God...the Lord is near.
When we choose to sin...the Lord is near.
Gives a different perspective doesn't it?
In all the moments of your life because...the Lord is near. He promised to never leave us or forsake us. The Lord is near.
Posted by MacGyverDB at 6:31 AM